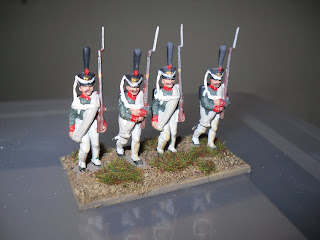 So, finally I have made an effort to get into Napoleonic wargames. I bought three books on amazon last week, the most interesting of which is Neil Thomas' Napoleonic Wargaming. Provides those new to it a good deal of background. I also got Napoleonic Wargaming for Fun and Napoleon by Mathew Fletcher, which is the big colourful Games Workshop style rule set. The only thing that puts me off this is the number of figures you seem to need for the rules and they seem a lot less simple than others I've seen. Other than that its a book worth having.
I've stuck with plastic figures since you can pretty much make an army out of a coupe of boxes of infantry, one of cavalry and some artillery. Here are the first batch of Nap Russians finished, they are Zveda plastics and I am very pleased with them. Very realistic, good various poses and a nice range for Russians at least.
I got some HaT French light infantry, which by mistake had a sprue of 1805 line infantry in the box too, which was great as I needed these! HaT also do the 1805 artillery - bicorne French to match the line. Also have HaT Russian light infantry (in the top hats) though these look mildly daft. May just stick with the Zveda stuff.
Will hopefully get a game on soon.
Posted by Tim_Waudby at 09:42 1 comment: