Good day out at Fiasco today. I recently bought the Wings of Glory WWI rules and some planes and have been having a lot of fun with it. I was pleased to see a game being put on by Hedingley Wargamers. Myself and Richie joined in a game. I learnt just how deadly rear gunners can be! Playing a French Spad I was out numbered in the end. 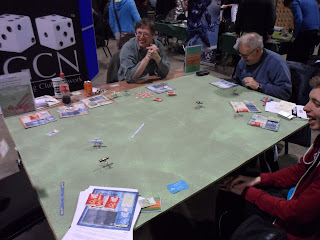 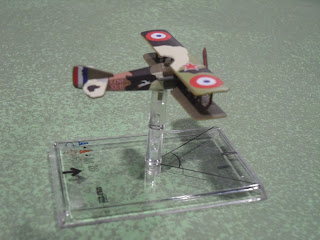 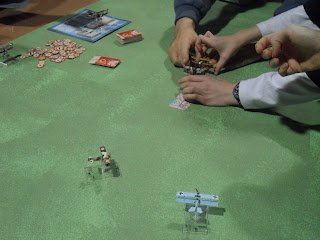 At the entrance to to the show was a 28mm ACW game and this battleship game, which looked pretty good though I didnt get chance to talk to the guy doing it and he had gone when we left. Seen the game at other shows too. Would be a good addition to a Wings of Glory game! 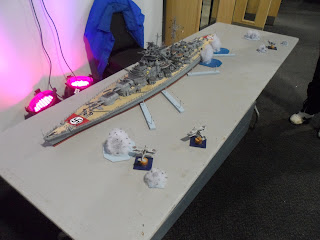 The show quietened off considerably after lunchtime and traders were packing up at £3:30pm but it was an enjoyable do. Met up with Alex and Bob and discussed plans for future games. There seems to be fewer and fewer games and traders at Fiasco, which is a shame but still it's worth a visit. The quieter afternoon was a better time to browse, chat and shop. I spent my cash pretty quick, mostly on a WoG Gotha bomber that I got from Caliver Books. Also bought a pre-made/painted winter T34 in 1/72 scale, some 20p old magazines an awesome little wargaming book from 1974 (as old as me) with some excellent pictures inside, some Italeri quick build Shermans for my 20mm German/US winter war stuff and 3 packs of Lancashie Games 20mm - Norwegians, Russians and Germans. The later purchase I now regret somewhat. It came to £42 for the figures, on closer inspection they arn't that good and looking through the lead pile I had enough figures anyway for what I wanted to do. Oh well, live and learn. It was the end of the day and I got carried away. Very pleased with the Gotha, it's a fiddle getting it in and out the box so might have to invest in a K&R multicase, they have specialist ones for WoG and had some at the show. Will order one on payday. I have some 'snow' which I'll be using on the Shermans to make them look appropriately weathered for Bastogne as illustrated on the box art. 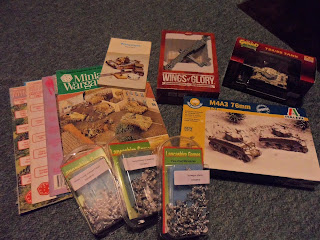 I'm hoping to use existing painted 20mm WWII US/German figures and vehicles for a Bolt Action game. Painting all the 28mm stuff is taking some time to get through. 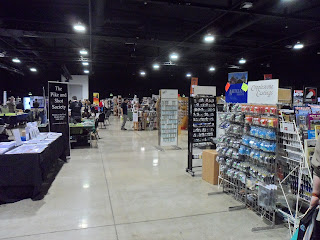 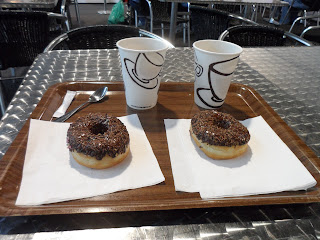 Good day out but as you can see, pretty quiet show once the crowds had dispersed after lunch. There was also a demo game of X-Wing the new Star Wars game based on the same mechanism as Wings of Glory, didn't get to try it as it was proving pretty popular but should be playing a game soon. Chocolate doughnuts for a quid were a welcome snack just before coming home.
Posted by Tim_Waudby at 11:53 No comments: