I have been wanting to begin making some big armies for a while and Napoleonics seemed an obvious choice. I was drawn in by the new Perry Prussians in greatcoats as they seemed an easy painting option to begin the collection with. I also have the Napoleon and Black Powder rules as well as Neil Thomas' Napoleonic Wargaming, though this lends itself better to smaller units of 4 bases each of Dbx style basing.

I decided to go with the more modern 40mm x 40mm base sizes for infantry and 50mm x 50mm for cavalry, when I get some.

I don't expect to have these finished anytime soon and as I'm aiming for as much metal as possible its going to be a big financial commitment but hopefully worth it in the end.

So, here is the first base done. 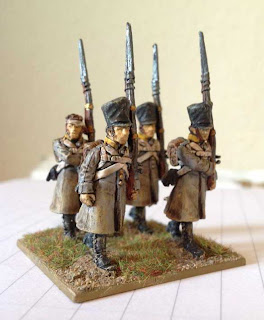 War of the Roses at York library.

Played a full game at the library today lasting another 2 hours or so. We were joined by some enthusiastic young war gamers who stayed for the whole battle and seemed to really enjoy it. They grasped the rules quite well after a while and got very involved. They also picked up the basic strategy of warfare at the time very well. 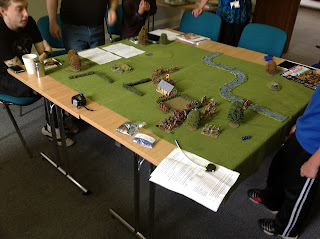 We've been invited back so will be there again soon for another game, possibly Viking next time as part of York Viking Festival. Will hopefully try and use the same Neil Thomas ancients rules for that too.

In preparation for our participation game at York Library we play tested the rules from Neil Thomas' book Ancient and Medieval Wargaming. They are a simple set of rules and I managed to type them out onto 4 sides of A4 to use as quick reference sheets. They replicated the nature of the warfare of the period with some understanding of what troop types did and were used for. Rather than follow Neil's suggested army list of 4 bases making each unit we just had one base per unit, which made the armies much more manageable and more like a DbA game. There is no command and control element, but then this would have been pretty minimal in the battles of the period anyway. The game took just over 2 hours to play out, but we played very leisurely with breaks for cake and tea (lemon drizzle!) The Lancastrian army was unpainted unfortunately. I'll get round to it soon! 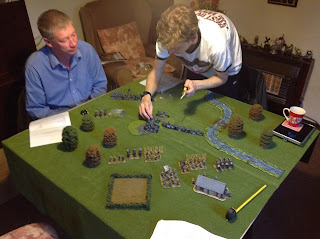 The Yorkist army was a more traditional set up with:

The rules replicate the nature of what the differnt troop types do very well but we felt we would need to add in some modifiers for future games. The Lancastiran army was much less orthodox, employing more foreign mercenaries and was composed of:

In the future I would add modifiers for pike or hand gunners against horse. The boom of the handguns would 'spook' horses quite easily during these times. Pike also would be an obvious advantage against horse. 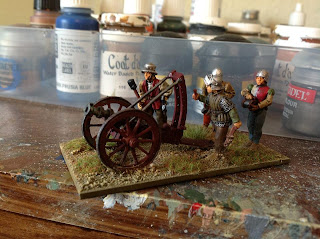 Cannon can be a real problem to your enemy and has a huge range in the rules, it also affects morale quite a lot. I painted this Perry gun in just one evening and was pretty pleased with it. Sadly it lasted two turns before exploding! The rules dictate that guns must test each turn, roll a 1 and your men got the mix wrong and the whole thing blows up, killing the crew as well. 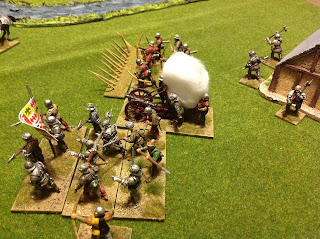 I made some archers stakes from toothpicks and we added a small modifer for getting past these, as with rivers in the rules, the stakes took a move to cross to get to the soft fleshy archers behind them. The Yorkist mistake was staying behind them too long.

I predicted at the start that, as in reality, the Men-at-Arms would be the battle winners and this proved to be the case. You have to play carfully, keeping archers back and sending heavy metal in to do the scrapping. It doesn't help going in to woods as we found movement was so restricted that it became too arkward, not really worth the extra cover.

There are a few things that you have to decide for yourself in the game, such as designating where the woods are and adding in other modifers as and when appropriate but this isn't difficult once you have the hand of it.

The rules are great for basic demo/participation games or for just having fun. My kind of rule set! I recently bought Neil Thomas' Introduction to Wargaming as it had similar rules for other periods, they don't look as good as the Medieval Rules on first thumb through and may be more tricky to adapt to different unit/base sizes but are still a good introduction. Most of the rules appear to be written for 15mm but we used the Perry 28's in smaller units and the distances worked well on a 4 x 4 foot table.

For all my WoTR gaming I have bought most all Perry plastics, so far 3 boxes of Halberds and Bows, 1 box of Swiss Mercenaries for the guns and crossbow, 1 box of mounted men-at-arms (this is very flexible and can make up various mounted troop types) in metal I only have the one Perry gun so far and 6 individual Perry men-at-arms, which I just bought for painting really, they can serve to occupy buildings etc. I don't think I will need anything else, maybe another gun or a wagon or something to add interest. This makes the whole lot of figures come in at around £100, which is a good deal for a whole game. You could probably game these rules well enough with just two boxes of bows and bills even. 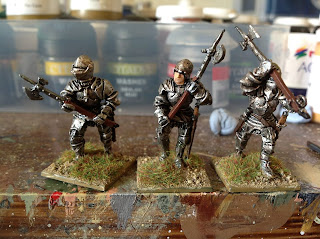 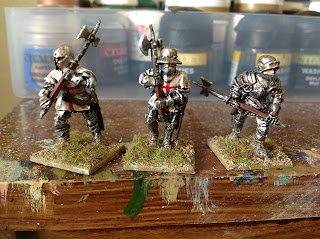 Neil Thomas' Ancient and Medieval Wargaming book is definately worth a buy if you want to dablle in these periods for fun games or for participation. If you like DbA or old school type wargaming you'll enjoy using these as a starting point.