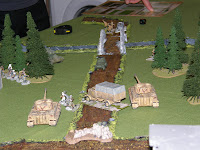 The inevitable happened to this armoured car causing the first blockage to the road, the following SU 152 was also destroyed right on the end of the bridge. This left the battle in a shoot out between Tigers and T34's, the Tigers were already limping and the Soviets eventually cleared all real opposition to the town. The T34's then covered the bridge and waited for engineering support to clear a way through. Meanwhile the artillery outside the town, which had been inactive all through, braced itself for a final stand. The Waffen SS company in the Dingly Dell of Death fell to the revenge of the T34's and retreated with a HMG manned by a lone gunner. Some surviving troops from the second company also fell back towards the town.

The Red Army could be said to have had a difficult victory. Assuming no further resistance could be fielded soon. Soviet losses were great but this is not a problem for the huge Red Army. High Command was happy with Comrade Peelerski's attack and he was spared the gulag on this occasion. The German's lost yet more tanks they can ill afford and a number of very brave troops. Iron crosses were won by the crew of the Panther and many of the infantry were decorated for their efforts but this battle only served to slow the tide of iron rolling in from the East.
Posted by Tim_Waudby at 05:36 1 comment:

The Dingly Dell of Death! 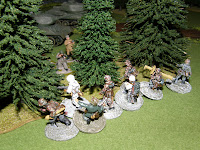 The German's and Soviets both entered each side of the wood and fought a fierce firefight through the trees, the Red Army took massive losses but stood firm through a couple of morale tests even after loosing their Political Commisar. They fought on despite no one being there to remind them that an NKVD firing squad awaited anyone thinking of surrender. The last few remnants eventually melted away depite support arriving from the T34's that had retreated back up the road after and exchange with the Tigers outside the town. German losses in the wood were minimal at this point but the other company had rather blindly jumped into their transport and tried to cross the road under the bombardment of the T34's to joint with their brothers in defence in the wood in the hope they would be better placed to attack the Soviet armour with infantry crewed anti-tank weapons. Few survived and the truck was now blocking the road forcing the Tigers to chase the T34's cross country. Meanwhile the Marder III was on it's way to the wood to support the infantry, vicorious against the Red Army infantry but now at the mercy of the T34's.
Posted by Tim_Waudby at 05:09 No comments:

Not so quiet on the Eastern Front (Part 3) 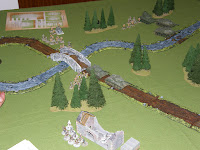 Upon crossing the first Soviet rifle company made for a nearby wood, the Germans now aware of what was happening at the bridge bagen to move out on foot from the farm to take a defensive position in the wood. The T34's roll on down the road, unaware of the Tigers waiting at the end of it.

Not so quiet on the Eastern Front (Part 2) 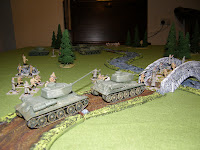 The Red Army made good progress initially, sending the first infantry company over the bridge, followed by the T34's. The Command and Heavy Company (not trusting the bridge at first) went for the ford crossing. Disaster struck early on for the Red Army as a Panther hiding in some woods managed to destroy one of the heavy SU 152's right in the crossing point blocking it for anything else. The Soviet tanks gave a good fight and the Panther sustained some damage but had a number of lucky escapes from the Soviets who were clearly phased by trying to ford a river and fire at the same time. Infantry continued to cross the bridge unchallenged. The German Tigers began to roll out of their nests in the town and took up a defence at the end of the road along with a HMG unit. The other two Waffen SS companies held defensive positions in a wood and a farm at each side of the road into the town. During the mid part of the opperation there was only gradual movement as the remaining Soviet Heavy company and T34's began their crossing of the bridge.
Posted by Tim_Waudby at 04:44 No comments:

Not so quiet on the Eastern Front (Part1) 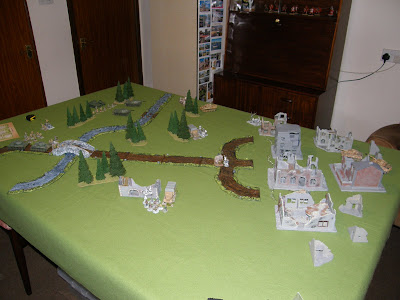 Here is an update from last night's battle. Peeler popped over and I set up a Rapid Fire game. The basic scenario was that one side had to cross a river at two possible points to occupy a town at the other end of the table. The opposing side simply had to cause as much hassle to the other as possible until the town could be reinforced. We chose Soviets as the attacking force and Germans as the defenders.
The forces were made up as:
Germans:
2 x Companies of Waffen SS each with transport
2 x HMG teams
A reduced tank company of Tiger I's (2 tanks) with a supporting Marder III
A forward detachment of 1 Panther tank
1 x 75mm gun (crewed by locals in German service)
Soviets:
Command - 1 x T34 & Armoured car as supporting recon
1 x Infantry Battalion (3 Companies of Rifle Infantry) plus 1 HMG and 1 Medium Mortar
Infantry Battlion Command = Lend Lease Jeep, Officers and Political Commisars
1 x Medium Armoured Company (2 x T32)
1 x Heavy Armoured Company (2 x SU 152)
It was envisaged that the Red army would quickly storm over the crossing points of the bridge and the ford and that the relatively green Waffen SS who were commanded by Von Waudby would make a fighting retreat into the town where they would use their infantry anti-tank weapons to stop the Soviet armour from progressing through the town and ever closer towards Berlin!
... all did not go to plan!
Posted by Tim_Waudby at 04:11 No comments: 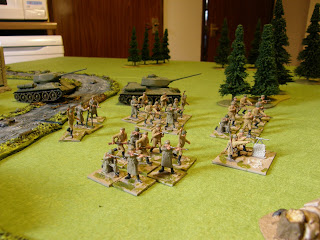 Today I have been setting out the wargames boards to make sure they don't collapse! I've never put such a large gaming space togther but it works fantastically well! The Soviets are nearly all done but the Germans need a lot of painting still, I will be painting like crazy this week to get everything ready. May need another day off at this rate. Plastic figures have really come into their own now with the new harder plastic Italeri and Waterloo figures, even with the price increase they are still only £6 for a Rapid Fire battalion, in metal that would be more like £40. I like the poses in the plastic ranges and they look a lot more realistic. My vehicles are all either quick build kits or resin castings. As much time saved glueing stuff the better!
Posted by Tim_Waudby at 07:16 No comments:

A fantastic day was had at the Pudsey show last week. A good turn out from the Yorkshire Coast Wargamers and a great couple of Zulu Wars battles put on using DbColonial rules and figures with thanks to Alex and Peeler!

I bought a load of resin vehicles from Under the Bed, some of which I'm disappointed in as they are crumbling and snapping before I've even painted them, grrr. You get pigs and gems in this range but at the price of them they are ok. I will stick to Ready to Roll and Millicast in the future when I feel the need for a resin AFV in 1/72 scale. Also got some figures from Ceasar in 1/72 plastic, the new US GI's and some German's I think, they went straight into giftwrap when I got them home so I can't remember now. Damn this time of year!

Pudsey was my favourite show this year! Looking forward to the next one. 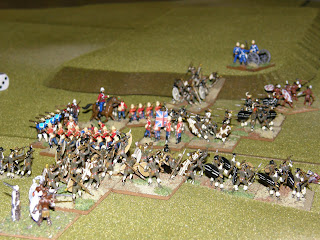