German 1/32's out now! These came into the shop this week. Now I can start some big battles! Hope to have the Afrika Corps out soon too! 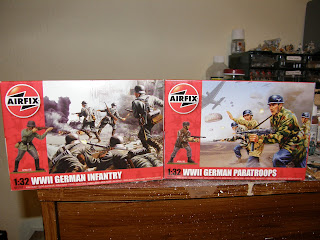 Close up of the Panther

Not sure I've got the camo quite right? 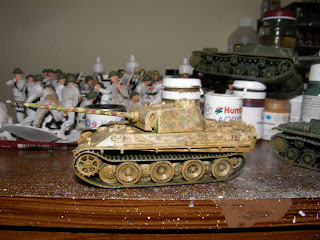 One of the SPG's I got from Rich, Panther in the back ground. These are both Italeri 'Quick Build' kits (I think) 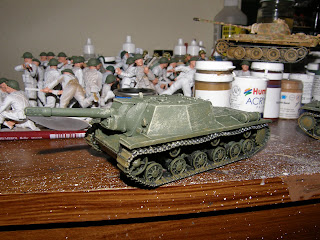 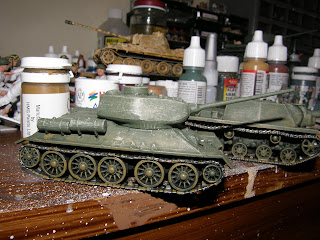 This is a Pegasus 'Quick Build' T34. One of two you get in the box for £7.99. At £4 a tank I can make up a whole battalion quite reasonably. They do still have fiddly bits and the second tank I made I lost patience with these and just left them off and it still looks good.
Posted by Tim_Waudby at 15:13 No comments:

Making up for the past!

I seem to be collecting quite a pile of 1/32's now! As a child I never had a complete box of Airfix, only bits and pieces of sets I had given. I think I may be over-compensating now. The only set I'm not keen on are the US Infantry, poorly armed and not much variety. Some odd poses in the US paratroops too. I think I'll mostly be painting the Brits and Gerries.
Posted by Tim_Waudby at 15:05 No comments: 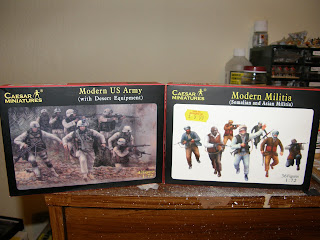 I'm a big fan of the series 'Generation Kill' and saw these in the shop this week. Well, bought them I should say. The first sets of Ceasar figures I bought where two sets of WWII Germans (late war) and they were very rubbery, too rubbery to bother to paint but I took a chance on these and they have stiffened them up thankfully. The castings are excellent, though the militia has a few figures I won't use - big breasted women in skimpy dresses (where do you see them in Muslim countries?) and child soldiers (not comfortable with these either.) There are many modern vehicles available pre-made and the shop had Humvees, Bradleys and a great looking T64. Skirmish games comming up! 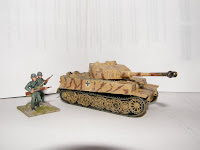 Managed to re-equip my paint desk with much needed basing paint today at the Leeds waragmes show, so here is the first base of Valliant 20mm German Infantry done. They are alongside a Tiger I aquired from Richard, these are the new Italeri fast build kits and are very good! I also picked up a German supply wagon with horses from Skyrex just to pad out the battalion supply equipment. Hopefully I should have all the Germans done soon.
There was a lot of interesting stuff at the show despite being even smaller yet again this year. For a WWII fan there was lots to poke about in at the trade stalls. There was a Rapid Fire game which was a modern Arab/Israeli battle in 15mm. I didn't get any pics since it didn't seem to be progressing much and there was a lot of tank traffic jams it seemed.
I liked the figures that Grubby Tanks had and I'm keen to get some Russians togther, that may be this year's Christmas present to myself? There was a trader selling ready painted Rapid Fire units which was also tempting, if I'd had £200 I'd have snapped em up.
Posted by Tim_Waudby at 10:05 2 comments: