I heard about this game a while ago at this year's Newcastle show but didn't pay it any attention at the time. I stumbled accross it while surfing the wargames boards recently then descovered that this was the skirmish game that Norman will be putting on at the Ayton show at Easter. I obtained a copy of the rules by joining their yahoo group and paypaling the writer who very promptly sent me the very lovingly made rule set, which is 40 pages of background history along with the game mechanics. The game is played with groups of around 20 28mm figures representing warbands of Vikings, Saxons, Normans or really anything from ancient to dark age history. I'm still reading them but will update on how our games go at a later date. It seems a really fun game! http://games.groups.yahoo.com/group/PigWarriors/?yguid=40146765 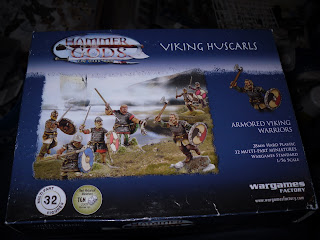 I bought a box of Wargames Factory Viking Huscarl's from an ebay seller, I think they were about £16 with free postage which seemed good value for what you get. The poses are really nice and other than Valliant Miniatures 20mm WW2 figures these have been the first 28mm plastic 'kit' figures I have ever bought with a serious intention to use in a game and I am now a convert, they glue better that expected and unlike metal figures with spears and shields arn't as easily broken when dropped.

I'm not the best painter by any means but was quite pleased how quick and easy I managed this first one. They are undercoated in black and gun metal and silver paint is drybrushed over the mail to give it a bit of definaition and depth. The ground work on the base isn't finshed yet and there will be some static grass added. Really looking forward to getting the others done soon. 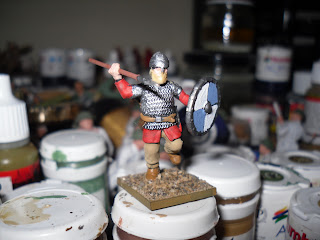 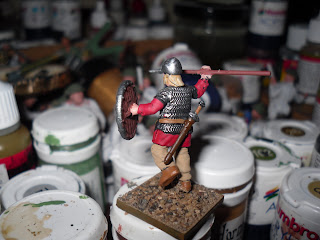 The only drawback with this box of figures is that they are all in chain mail and there are no standard bearers. The game requires more of a mix of armour and weapons, such as 8 mail armoured, 8 un-armoured, a leader, a standard and a couple of archers, though there are box and arrow options in this box. Luckily my mate has the Saxons of the same make, which do include unarmoured types, so we can swap about to make the right kind of warbands. In theory you could get three good warbands with figures to spare from just one box of Vikings and one box of Saxons. 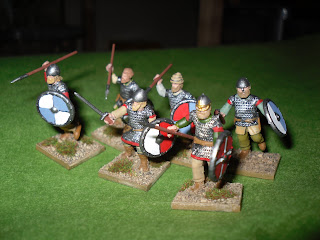 Got a few more of the angry little fellas done, they paint quite quickly even with having to hand paint the shields, which is quite satisfying to do. I've now ordered a box of Saxons and have my eye on some Norman cavalry from Warlord Games. Should very soon have two warbands ready for a ruck!
Posted by Tim_Waudby at 15:10 No comments:

I'm currenyly spending my enforced at home time (due to the snow) painting up some things for a Western Desert Rapid Fire game. I'm a huge fan of Rapid Fire and don't play it half as much as I should. Colin recently released the supplement with lots of army lists in the new computer graphics style, which are all very useful and interesting! http://www.rapid-fire.uk.com/ 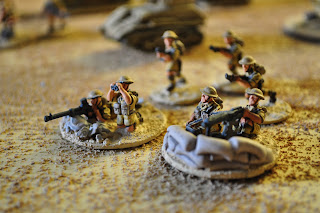 I've had a battlion of Braitannia Brits with an attached company of Punjabi's waiting to go into action for some time. Here are some heavy weapons, the rocks are cat litter and the sandbags were made from milliput. Metalic paint was added to helmets for a scratched look. 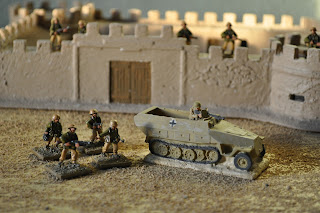 I unearthed from the lead mountain a battalion of German's made by Raventhorpe, there is about a company or so of Afrika Corps and a full battalion of regular infantry which can be painted as Afrika Corps as above. These are nice and simple figures with good poses, they paint up well and I have satin varnished them for a bit of extra strength to the paint work and to give them that retro Rapid Fire look like you see in the origional books. The Sdkfz is from the Ready to Roll range. I bought a whole load of these along with the Raventhorpe figures second hand many years ago, don't know why I waited so long to paint them. I'm hoping to order a few more. 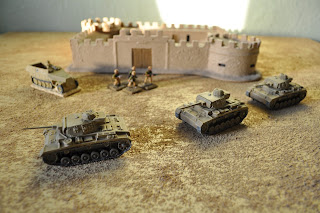 Ready to Roll Panzer III's (50mm gun) trundle past the Italian fort. These are some of the best models in the RTR range I think, good solid models and nice detail. There is a nice weight to these when you pick them up, better for gaming than fragile plastic kits. 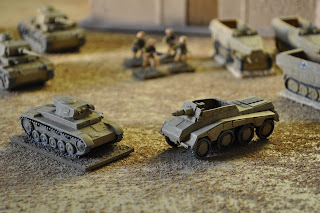 Under the Bed enterprizes make some nice and cheap vehicles and have some quite origional subjects too. They are made from a light resin which is quite brittle and glueing would be best done with a 2 part expoxy resin, if you have it. I don't and have used super glue gel which works ok if you leave it to set a good while. Always a joy to chat to these guys at war games shows! http://www.underbed.co.uk/ 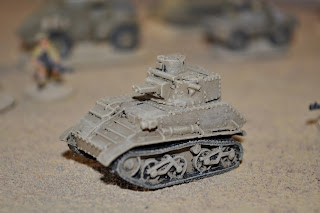 Vickers Mk IV Light Tank one of the Front Line models made by Under the Bed Enterprizes. This is my favourite model from their range, nice detail and paints up well. 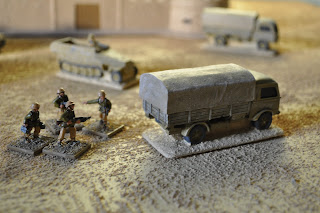 Germans make use of Italian trucks left behind. The Afrika Corps was always short of transport and used whatever they could forage, including many British trucks. These are Ready to Roll Fiat Dovunque trucks. To see the Ready to Roll range click the Rapid Fire link above. 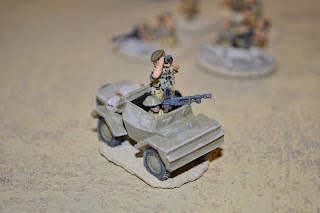 I'll add more pics of Rapid Fire games and models when I can. I have another battalion of Kelly Hero's 8th army on order from Grubby Tanks and some more British vehicles SAS/LRDG jeeps & chevrolet's and a Crusader tank all Britannia. Also have some Fallshirmjager in the post to use for a Crete scenario, which I hope to use the 8th army for also, possibly mix in some standard uniformed Brits in for that 'Medierainian' look of the troops of that theatre.
Posted by Tim_Waudby at 08:31 1 comment: