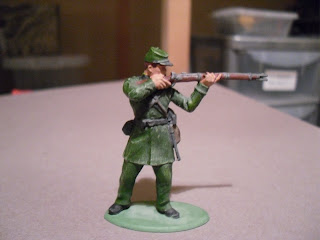 I am painting up a few of these at the minute, they are supposed to be Union 'Coloured' Infantry made by Call to Arms but the long frock coat lends itself very well to them being painted as Berdans Sharpshooters too. I need to get the Iron Brigade from Call to Arms too. These will be used in skirmish roles in the forthcoming horse and museket toy soldier rules.
Posted by Tim_Waudby at 13:55 No comments: 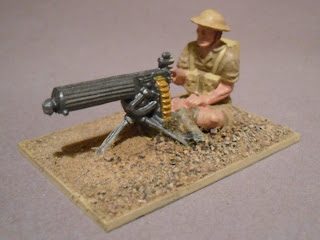 I had a couple of these from my youth lying about and managed to get some from ebay too. There is a good Bren gunner pose in the Timpo set too. 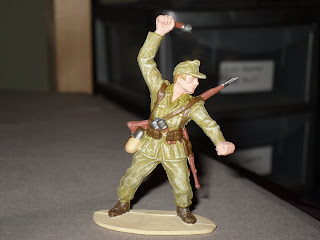 Finally got the first one done after about 3 boxes lying about primed and waiting for a painting for the last year. If can get enough done and also get some scenery made in time there might be a Western Desert toy soldier game at the next show! 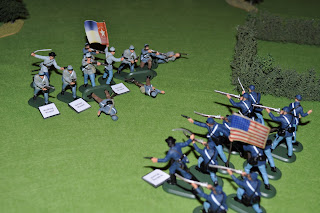 We used the marker chips from the origional Toy Soldier game that denote if a figure is 'walking wounded' or 'seriously wounded' this helps keep track of the damage to the formation. It worked really well and these markers are very useful when you have a number of figures on the table. 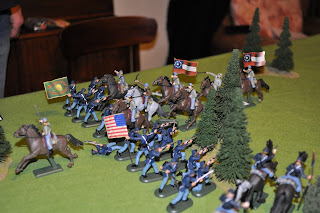 Rebel cavalry smashing through the Union line. At this point we realised we didn't know what we should be doing once through to the other side? Ended up turning back onto the rear lines but this proved fatal for the cavalry who suddenly foung themselves staring down a lot of unfired musket barrels.

Working on the Horse and Muskrat rules 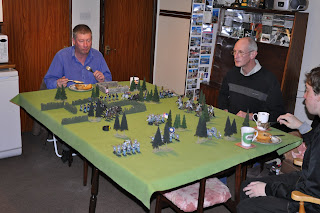 Had a very good evening last night with Peeler, Richie and Dave trying to work out how to appropriate the Toy Soldier rules we have to be able to fight horse and musket era battles. It turned out to me more complicated than I thought it would be. The use of cavalry is going to need a lot of thought and play testing. There were quite a few issues with movement and melee but we tinkered about and have some ideas to try next time. We also had artillery and have some good game mechanisms for the use of shot and canister, these also need some more play testing. The most important element will be how bodies of troops move around in line formation, how many should be in formation and what effects will breaking up from formation and fighting as individuals would have on firepower. That probably needs to be the starting point and we can build everything else around that. We had a good game despite figuring things out as we went, I think this adds to the enjoyment sometimes. The day was won by the Confedaracy after making good use of massed infantry and a daring, if not slightly suicidal, cavalry charge into the main Union force at the start of the battle.
Extra hot jallypeenoes pizzas and pies were consumed. Peeler brought me some fantastic 1/32 WWII figures and some vehicle kits a Sherman and some Bren Carriers. The figures had in them the Italeri 75mm gun and the TSSD German Cavalry, which I didn't have! Also some Conte Germans that I haven't seen before. So lots of painting to do now. We will be at a couple of shows soon so hopefully will get the new figures done and ready for those.
Posted by Tim_Waudby at 01:26 No comments: