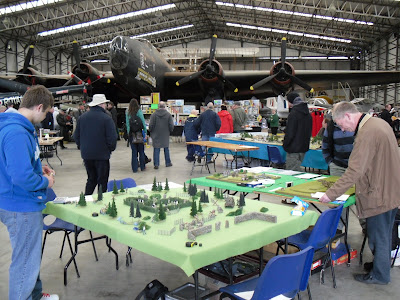 So, the Yorkshire Coast Wargamers went en masse to this year's Battle Group North and took an array of games with us, mostly Db variants but also our hot of the press 'A Game of Toy Soldiers'. The wargames element of the event (it's primarily a military vehicle and re-enactors show) is held in the large hanger with the Lancaster keeping an eye over everything. It was the first time some of our rank and file had played it and it was great to see seasoned wargamers like Jordan get into it and embrace what it's all about. Throughout the day we played three games of different scenarios, all incorporating a cow field with my newly aquired Britains cows. The game was very popular with kids who were quick to grasp the rules and loved being able to 'play' a game rather than puzzle one out. We even had a kid of 2 years old playing! For some of them it was their first wargame and they loved it. I gave away a few play sheets to exited Dads who thought it was ideal. Some of the other wargamers were interested in buying the rule set so now I'm on with polishing them up ready to be made into a proper booklet. A very enjoyable weekend! I spent some of Sunday afternoon flying over York in a helicopter with a WWII veteran who was there for his 90th Birthday that day. A very special gentleman indeed, he was still as fit as anyone.
Posted by Tim_Waudby at 14:30